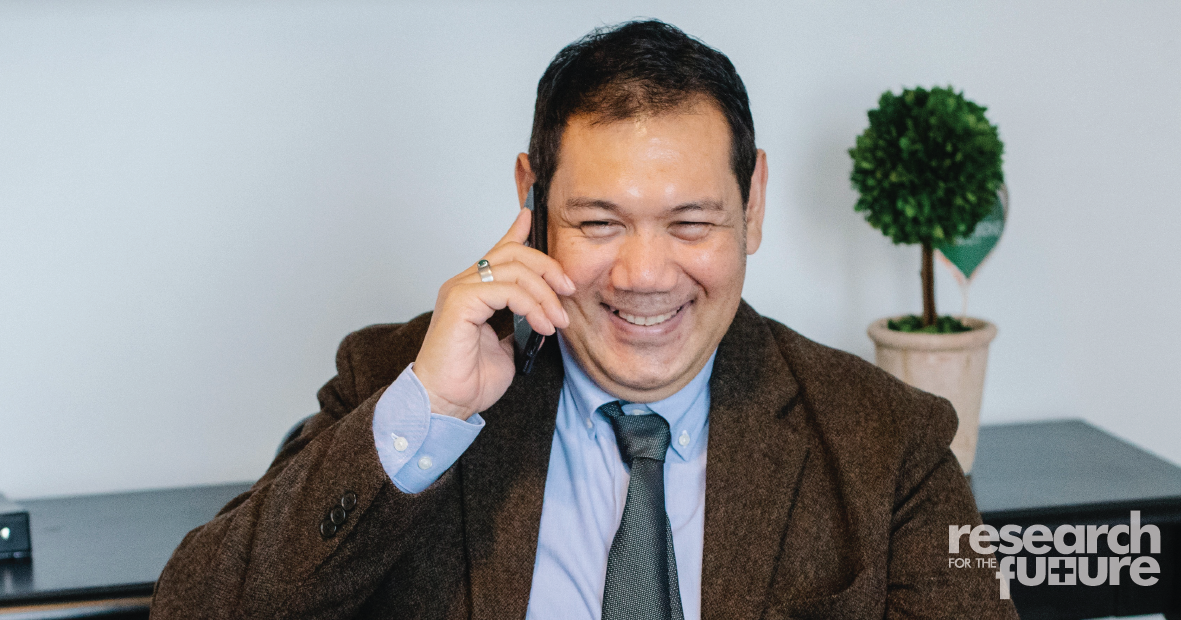 You have been a Help BEAT Diabetes volunteer for quite a while, how did you first get involved?

I think I saw an email or something from Diabetes UK saying they were looking for volunteers, so I signed up, I filled in a web form to register.

Had you had any previous experience of taking part in research?

Yes, I’d done quite a lot because I work at a university and our staff intranet would often promote opportunities to take part in things like brain and bone scans.  I was interested in the findings of their research and also want to give something back as well.

Yes.  It’s very much the same as what I’d done previously.  It was actually through a previous research study that I was diagnosed with diabetes. I was a healthy control subject testing a drug and when I had the initial medical screening that they said I needed to go to my own GP for a HbA1c test.  I did, and was diagnosed with type 2 diabetes.

So, taking part in research has had health benefits for you?

Yes, I found something out about my health which I may not have done if I hadn’t taken part.

Have you taken part in any research that Help BEAT Diabetes has invited you to?

Yes, I have.  It was one about diabetes and hearing.  It was carried out at the university where I work, which was great because it meant I could pop over in my lunch hour.

What was it about that study that made you want to take part?

It had a lot of personal interest for me.  My mum, who also had type 2 diabetes, lost her hearing and I don’t think we ever knew if it was to do with her diabetes or if it was something genetic.  I was interested to see if there might be a family link to it, so I wanted to take part to find a bit more about it.

Have you taken part in any other studies?

No, not yet. I have received information on another one that I’m interested in and am considering.

We also send out information that we think our volunteers might be interested in, such as events or PPIE (patient and public involvement and engagement) opportunities.  Do you find this useful?

Yes, definitely.  I like getting these emails because I hope that eventually, I will have the time to attend some of the groups – so far, they have clashed with work, unfortunately.

When we inform you about a study, we leave it up to you to contact the researcher, if you want to take part. Is that something that you are comfortable doing?

Yes, I’, more than happy to do it that way, as it’s how I’ve always taken part in research.  However, I work at the university and am familiar with researchers, I can imagine it may be more daunting for some other people.  But it really is nothing to be worried about.

How was the process when you contacted the researcher?

Yes, it was really easy, seamless.  We had email contact and set up some appointment times etc.  I received a ‘check back’ email from the researcher, which was good because I realised that they were keen for me to take part and I made sure that I blocked it out in my diary.

What did taking part in that study involve?

There was a series of hearing tests, listening to noises and reacting by pressing a button when you could hear it.  There were about three or four 4 tests like this.  Some of them were ‘active’ ones where you heard a noise and had to press a button, others were’ passive’ where noise was played into your ear.  What was really good was that the researcher explained everything thoroughly.  It was really interesting.

Was the information you received from us an accurate description of the study and what was involved.

Yes, I think so.  I had read all the information before I went and when I got there it was exactly as described.  The researcher went through everything again with me.  From start to finish it was made very clear.

Did you discover anything about your hearing?

I’d always thought my hearing was poor, but the researcher told me it was actually quite good!

Did you find out anything else about your health, or learn anything new?

No, not about my health.  But I was made aware that diabetes can affect your hearing.  For me, it will mean that if I notice I am struggling to hear in the future I will be able to keep an eye on it.  Taking part has definitely made me more aware of some of the complications of having diabetes.

Would you recommend getting involved in research?

Definitely.  Taking part in research means you are giving something back to the NHS.  I hope that one day we might be able to find a cure or have better medicines that will make life easier.

What benefits have you found from getting involved?

For me straight off, I wouldn’t have been diagnosed with diabetes if I hadn’t taken part in a research study. Taking part in research makes you more aware of your own condition. I have done one other study with the Diabetes Centre that involved taking blood which wasn’t a problem.  When I go, I always prepare myself – thinking about what my last HbA1c was, what my current glucose levels are, if I’m having any complications and other issues like that.  It has made me concentrate on my own health because usually, the researchers are interested in how your general wellbeing is and how well controlled your diabetes is

Are there any negatives to taking part in research?

No, I don’t think so.  Even in the past, before being diagnosed with diabetes, I was a ‘research junkie’, I liked to discover the things that are going on.  In some research, you get a ‘mini-MOT’ health check, and that has to be worth it!